What are the top bucket list experiences in Turkey? We’ve compiled some of the most popular and some of our favorite things to add to your Turkey trip itinerary.

Eat Your Way Through Turkey

Now, this is one of our absolute favorite things to do in Turkey! Eating Turkish food is not just about the food, but the experience of togetherness, taking your time to enjoy the people you are with, and being open to trying new things. Every region is known for a specific food, so no matter where you go you’ll find some variety in the local specialty. Turkish food heavily consists of lamb, beef & chicken served with pilav, in season vegetables, and bread. If you’ve never had eggplant, Turkey is the place to try it. They have so many different mouthwatering eggplant dishes that will knock your socks off! We recommend babaganush, a chargrilled eggplant meze, and karniyarik, stuffed eggplant with lamb or beef.

You can catch a quick cheap meal by trying local street foods like a doner, consisting of lamb, beef or chicken that is stacked and cooked on a skewer than cut off in thin slices and placed in a wrap. If you’re looking for vegetarian or vegan dishes, there are options for you that are delicious such as imam bagildi, borek, cig kofte & mercimek corbasi. Some of the larger cities in Turkey have restaurants that cater to vegetarians.

You’ll have many opportunities to enjoy Turkish tea and coffee during your trip. Enjoy!

Located in the Sultan Ahmet area of Istanbul directly across from the Blue Mosque, the Hagia Sophia was built in 453 and was the largest Christian church of the Byzantine Empire. It is part of the UNESCO World Heritage List of the Historic Areas of Istanbul. In 1435 it was converted to a mosque, then established as a museum in 1935. In 2020, Turkey reopened it as a mosque.

As you walk through the Hagia Sophia, you’ll find a representation of the history of Istanbul, where East meets West and the different religions coexisting within this culture.

The dome of the Hagia Sophia was the first of its kind and considered to have changed the history of architecture. The Byzantine elements are seen in the interior dome, massive pillars, and the mosaics of Jesus and the Virgin Mary, angels, and saints.

The Islamic elements consist of the large hanging chandeliers and round placards with the names of Muhammad and Allah in Arabic.

If this is your first trip to Turkey, we encourage you to take an hour to walk around and enjoy the quiet and admire the beauty of a masterpiece that represents the beauty of two different worlds.

As of July 2020 when the Hagia Sophia was reopened as a mosque, you cannot go upstairs to view the tile mosaics from the church. You can still walk through the entire first floor.

Don’t miss this bucket list experience in Turkey! The only word that can describe experiencing the hot air balloons in Cappadocia is magical. Get up before sunrise and enjoy a bird’s eye view of the natural landscape of the fairy chimneys, river valley and cliffs is a wonderful sight to behold in the early morning hours. The fairy chimneys were originally shaped by a volcanic eruption and sculpted by erosion. You can see cave dwellings, rock-hewn sanctuaries, and villages from the sky.

If you’re afraid of heights or a hot air balloon trip doesn’t fit in your budget, there are some amazing rooftop locations to view the hundreds of hot air balloons as they fill the sky each morning.

We recommend seeing the balloons from Goreme at the top of the plateaus surrounding the city.

Walking through the Ancient City of Ephesus

Located in the Aegean region, you can reach the ancient site of Ephesus just a short drive from Izmir (about 1 hour driving) or from the cruise port city of Kusadasi (20 minutes driving). It was built in the 10th century BC and is famous for the Temple of Artemis, the Library of Celsus, and the Amphitheater.

Ephesus is one of the seven churches of Revelation mentioned in the Bible, with the gospel of John possibly being written there. The site is designated as a UNESCO World Heritage Site and is one of the Seven Wonders of the Ancient World.

Go early to spend the morning there skip some of the crowds. If you’re interested in the history of Ephesus, we recommend a local guide to take you through the site.

After visiting Ephesus, head to Selcuk for lunch to visit the Ephesus Museum then on to the picturesque hilltop village of Sirince to visit the local vineyards.

Mount Nemrut is located in southeastern Turkey near Adiyaman and Kahta and is listed as a UNESCO World Heritage site. It’s known for the large statues that are found at the summit that use to stand 26-30 ft tall. The heads have been removed from the original statues. They’re assumed to be royal tombs from the 1st century BC.

If you have time for a short trip to Southeastern Turkey and have to pick one sight to see, this is it! You’ll need to stay in the area the day before then arrive at sunrise on the summit to experience majestic views and the site.

Note: You can only access the mountain from May to October due to snow closing the road to the summit. Also, once you park your car, you will have about a 600 meter uphill walk to the summit and statues.

Go on a Blue Cruise

Experience some of the clearest and bluest of the Turkish Coast, sailing the Mediterranean Sea between the coastal cities Antalya and Bodrum. A cruise will get you away from the hustle of the tourist areas and time to swim, snorkel, play in the water and take time to walk ashore to explore ancient ruins as you sail the coast.

Your designated crew will prepare and serve your meals – your only responsibility is relaxing and having fun. It’s a wonderful way to get off the beaten path to explore.

This is a great option for a family or group of friends, or romantic couples retreat to getaway.

The underground cities in Cappadocia were first chiseled out in the Bronze Age Hittite era. Still, they were speeded up between the 6th and 7th Centuries due to the region’s Christians seeking refuge from the Arab and Persian invaders.  The cities are all interconnected and could be lived in for months at a time.

Derinkuyu Underground City, is the largest and deepest underground shelter, going 8 stories underground. It has many tunnels and rooms as you move deeper into the ground such as a large chapel area, living, and storage areas.

Kaymakli is an underground city that is close by that you can explore as well. You can explore up to 4 levels and tend to have fewer visitors if you’re looking to avoid the larger tourist groups.

See the Iznik Tiles of the Blue Mosque

This site is one of the most popular things to do on your trip to Turkey. The Sultan Ahmet Mosque or Blue Mosque is an iconic historical site and an essential part of Istanbul that you will hear the calls to prayer six times a day. The Ottoman mosque has five main domes, eight secondary domes, and six-minarets built between 1609 – 1616 by Sultan Ahmed I. The interior is lined with more than 20,000 handmade Iznik tiles and over 200 stained glass windows. The mosque is was built directly across from the Hagia Sophia, which was a church at that time.

It is closed to non-worshippers during the six daily prayer times.

As of July 2017, the interior of the Blue Mosque is going through an extensive restoration. You can go inside, but the columns and tiles are wrapped and you cannot see them. We recommend going to see Sulamaniye Mosque if you want to see the artistry of the blue Iznik tiles.

Aspendos is located about 30 miles east of Antalya and is best known for each ancient amphitheater built in honor of Marcus Aurealis in the 2nd century AD. With its amazing acoustics, the theater still hosts performances and festivals today. If you like to explore  – you can hike the area and visit the amphitheater, then explore the rest of the site from the acropolis above the theater and you can see the basilica, agora and nymphaeum.

After seeing Aspendos, you head back towards Antalya and stop at the ancient city of Perge.

The Turkish Mediterranean Coast is famous for paragliding with Oludeniz being one of the top destinations to fly. Oludeniz is about 9 miles from Fethiye and is home to the Blue Lagoon – the UNESCO world heritage site.

There are many different companies that offer short 20 minute flights or stay up longer for up to 45 minutes.  You’ll be harnessed in and the pilot will fly – you’ll be able to take photos or video. Many of the companies offer a video of your adventure as part of the cost.

We’ve done this several times and is always a highlight we highly recommend.

Mount Ararat is located in Eastern Turkey near Dogubeyzit, near the border of Turkey and Iran. Mt. Ararat is a dormant volcano with an elevation of 16,956 ft and is a massive presence looming over the region as you arrive by car or bus.  Next to Mt. Ararat is Little Ararat sitting at 12,782ft. Also, you can visit the Noah’s Ark National Park.

There are times that the Ararat is open for hiking, but you must have a local guide and a permit. It all depends on the local political climate in the east. Eastern Turkey is beautiful, and the local cuisine is delicious! This area is not recommended to travel alone or without a guide.

Shopping at the Grand Bazaar

Built between 1455 – 1461, the Grand Bazaar is one of the largest and oldest covered markets in the world, hosting over 4,000 shops on 64 covered streets.  You can easily reach the bazaar from the Sultan Ahmet area after visiting the Blue Mosque, Hagia Sophia, & Basilica Cistern.

The top things to buy at the Grand Bazaar:

Learn more about planning your trip to Turkey,  Turkish Food, and what to pack for your trip. 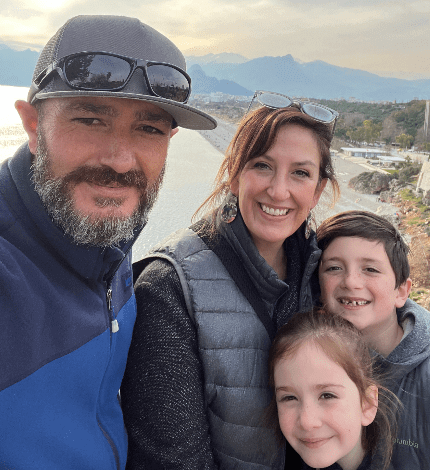 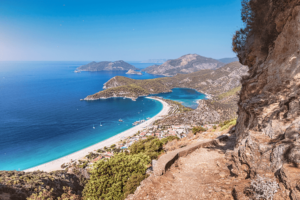 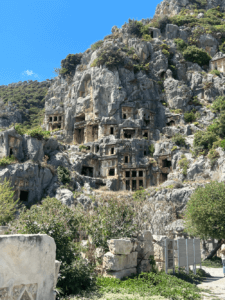