Visit the mountaintop city of Termessos, one of the best-preserved ancient sites in Antalya, Turkey. Whether you’re on your own or with kids, spend the afternoon hiking up the mountain, exploring the ancient ruins an enjoying majestic views of the Taurus mountains.

Next, read to get all of the details on how to get to Termessos from Antalya and what to do once you get there.

How to Get from Antalya to Termessos

Termessos is located 37km, about 45 minutes, from Antalya city by car. You’ll drive to the park which is about a 30-minute drive, then take a winding road about 15 minutes up to the Termessos trailhead. There are no buses that would take you directly to the entrance of the Gulluk Dagi National Park. You can use your Museum Pass to enter the site.

The Karrain Cave is near Termessos. Go explore the cave after exploring Termessos, then head down to Antalya for a day at the Konyaalti Beach.

Termessos was built at 1,050 meters on the top of Gulluk Mountain in the Taurus Mountain range. It’s not known exactly when it was founded but shows up in history in 334 BC when Alexander the Great arrived on the scene. The men of Termessos would go down to raid the coastal city of Phaselis – taking their food, horses, and women. For this reason, Alexander wanted to conquer Termessos – as Phaselis was a favorite location of his.

Known as the “Eagle’s Nest” by Alexander the Great, he was unable to conquer the city due to its mountain top location. He settled for burning all the olive trees below the city walls, destroying their olive crops.

Termessos was abandoned sometime in the 5th century when an earthquake crushed the aqueduct that provided water to the city. Termessos is not excavated but is dedicated as a National Park because of its mountaintop location and historical significance in Antalya, Turkey.

What to See at Termessos

We headed to Gulluk Dagi National Park to hike to the ancient city of Termessos. It’s about an hour’s drive from the Antalya city center. We suggest heading out in the morning as there are fewer visitors at that time. During the summer, the weather is cooler in the morning.

Follow the road up to the parking lot up by the trailhead to head up to Termessos.  There are restrooms located by the trailhead if you need them. Take plenty of water, sunscreen, and a hat. Once you’re up at the top of the mountain, there is some shade depending on where you go.

The trail heading up to Termessos is an easy dirt path, although it is steep in some places. There are 3 places as you walk up that have benches where you can stop and take a break, drink some water, and enjoy the view. Our kids did well walking up the path only needing to stop a few times for a break. Once you get to the top you can expect flatter areas to walk and not so much climbing.

Next, we’ll share more about what to see at the ancient city of Termessos.

First, as you reach the parking lot by the trailhead to Termessos, to the right you see the Temple of Artemis and Hadrian’s Gate. In the spring they are beautifully covered vines winding their way through the ruins.

As you make your way up the trail, you’ll see the lower city walls. Then a bit further you’ll see aqueducts and cisterns, before reaching the upper city walls and the main gate to the city.

As you pass the main gate to Termessos, you’ll see the gymnasium and baths to the left. Many of the walls have collapsed and parts of the buildings are underground. Furthermore, there are still some beautifully carved arches and walls still standing and you can imagine what they might have looked like.

As you head up the trail a bit further, you’ll come to a flat area that feels like the top of the mountain. You’ll have some magnificent views of the valley and the mountains on both sides along with the views of the trails.

On the flat area, you’ll see the area that was the political center and colonnaded street.

Next, head to the right from the colonnaded street, and you’ll come to Termessos’ upper agora. You’ll see a huge water cistern that has 5 holes that run across the top of the surface. The holes are grated so that they are safe to view. The cistern is an amazing sight to see up on top of a mountain. All things considered, with the size of the cistern, you can see how the people of Termessos had a consistent water supply on the mountain.

Next, we’ll look at the main attraction in Termessos – the theater.

The Termesoss theater is the most well know of all the things to see at Termessos. Sitting on top of the mountain with majestic views of the mountain range, our kids had so much fun climbing and exploring here.  The theater is believed to hold from 4,500 to 5,000 people.

Most importantly, on a clear day, if you look towards the Mediterranean, you can see the sea off in the distance between the mountains. The theater is special for our family as this is where Enes and I got engaged!

Next, walk down the path from the top of the theater and you’ll see one of the best-preserved buildings in Termessos, the Odeon. It was a meeting place of the city council and served as a small theater for musical and poetic performances.

The walls stand about 2 stories tall, but the interior has collapsed, so you are not able to get inside to explore. It’s believed the interior was covered by colorful mosaics because of the colors of some of the marble inside.

There are two main burial sites with many tombs and sarcophagi in Termessos. You’ll find one burial area as you walk down the trail along the mountainside as you head back down from the mountain top site. The most famous is the Tomb of Alcetas. Alcetas was one of Alexander the Great’s generals, that had laid claim to inherit Asia Minor after Alexander’s death. Termessos supported Alcetas’s claim as another of the generals, Antigonos proclaimed himself ruler. Alcestis killed himself instead of being captured by Antiogonos. The tomb was built in honor of the Alcetas by the younger generation of the Termessos. The tomb features a soldier fighting on his horse carved into the side of the mountain.

Also, the other burial site is located near the trailhead on one end of the parking lot. The largest tomb is the Lion Head tomb located in a mix of many other tombs and sarcophagi. There is a section of the Antalya Museum, dedicated to Termessos where you can see many important artifacts having to do with the tombs.

What can I see at Termessos?

Along with the well-known ruins of the theater, agora, cisterns, and tombs, there are majestic views of the Taurus mountains. On a clear day, you’ll see the Mediterranean Sea off in the distance.

Termessos is in the province of Antalya, Turkey. Drive 37km from the Antalya city center to the ancient city of Termessos.

Can I visit Termessos, Perge & Aspendos in one day?

Visiting Termessos, Perge & Aspendos on the same day would be difficult. Termessos is located west of Antalya about an 1 1/2 hours from Perge and Aspendos. Given the time you’ll need to hike at Termessos, you would pressed to make it to all three ancient sites in Antalya on the same day. We suggest taking one day for Termessos. Then, see Perge, Aspendos & Kursunlu Waterfalls on the same day as they are close to each other. 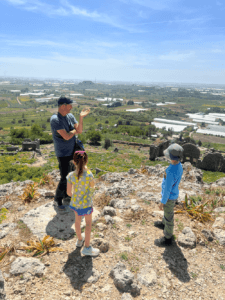